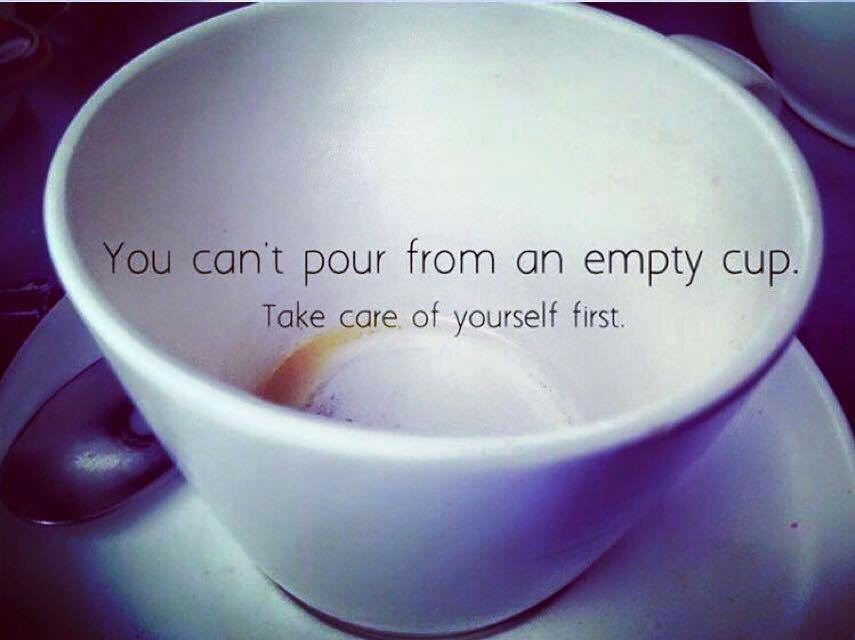 I’ve been thinking a lot about taking care of others. For the past 14 months or so, my focus has been about 99% on taking care of my family. I do brush my teeth, shower, and eat the meals prepared for all of us, but I’ve given very little thought to myself.

Until recently that is. One of the best things I saw somewhere on the Internet in my postpartum haze was this quote- “you can’t pour from an empty cup.” (I’ve since found a great article here– also the source of the image above) In typical new mom fashion, it took until about my daughter’s first birthday to implement it, but as I’ve said, small steps in the right direction count. There is a lot of pressure as a woman to have it all- a satisfying career, strong marriage, adorable kids, immaculate house. Add in on trend hair, clothes and makeup and game on. I quickly realized that all those things in equal amounts at the same time is only possible if you’re on a scripted TV show with a large staff. As I write, the dryer is re-fluffing the clothes I dried yesterday and haven’t gotten into the basket, never mind folded and away, the dishwasher is full of clean dishes and the sink half full of dirty ones and the baby has oatmeal in her hair. But you know what, she’s busy with breakfast, so I can sit with her and write for a minute.

One of the things that attracted me to Beautycounter was the idea of being your own beautiful. There have been more days than not over the past year where I haven’t given myself a second thought. I began to look in the mirror and not recognize myself. Not counting all the physical changes since the beginning of my pregnancy, but I hadn’t done anything strictly for myself in a year. Maybe little things- read a silly magazine, painted my toe nails, a short  nap instead of moping the kitchen- but I was letting the core of myself go. My husband is frustrated because I don’t know what I want, but I genuinely haven’t given it a thought in a long time. The idea behind being my own beautiful takes away the pressure to keep up with the magazines and the other women in my life who (from the outside) are all pulled together. One of my hesitations joining the Better Beauty Movement was the fact that I wouldn’t be taken seriously as someone who educates people about or sells beauty products.

Then we went on vacation. A vacation I stressed about because I hardly made any money all summer. It seemed like too much. I decided to bring a blank journal and carve out at lease 15 minutes a day to write. I’ve traditionally been good about keeping a travel journal, so I thought this would be a good start to getting a regular one going again (mixed results, but still going!). It was during that time spent on myself, even 10-15 minutes early in the morning, that I realized I believe in the mission of getting safer products in the hands of everyone, and the idea of belonging to a tribe of like minded people might be just the thing. I also realized that I didn’t need much to feel like I’d refilled my cup. Even taking a few minutes in the morning and at night to step away, close the bathroom door, wash my face with luxurious products I know aren’t harmful to me or my baby (when she inevitably snuggles in and slobbers all over my face) is enough. Would an hour of doing whatever I want with no guilt and pressure be better? Sure, but this small act of putting myself first makes me feel great. My skin hasn’t been better, which makes any makeup easier to apply and more rewarding. I feel like I’m accentuating the positive, not hiding behind a mask.

You can’t take good care of others if you don’t at least do something for yourself. The airlines advise you to put on your own oxygen first- a small step in an emergency, but a critical one- if you don’t take care of yourself, you can’t take care of others. I do cherish taking care of my family- I wouldn’t trade it for anything (well, someone else is welcome to the dishes…or the cat box), but taking that leap and committing to being my own beautiful and sharing the mission to get safe products in the hands of everyone has pushed me out of my rut. It’s forced me to rethink my own definition of beautiful. It’s forced me to take 10 minutes a day to take care of just myself- to learn about the different products in the line so I can speak authentically about them, but really to enjoy them.

If I can help you take that leap, email me. Let me help you refill your cup.

be your own beautiful, choices, choose quality, empowerment, having it all, health, it's the little things, know better do better, new mom, self care